E-Textiles - Textiles of the Future

What is behind the term E-Textiles

01 E-Textiles: The new trend of the future

The term smart home is on everyone's lips and you have certainly heard of it and recognized the advantages. Controlling the most important functions in your home via smartphone definitely has its appeal and makes your life much easier. makes your life a lot easier. But have you ever heard of smart textiles? Probably not, because this trend is as new as it is innovative. We'll tell you what smart textiles, or e-textiles, are all about and why you should and why you should take advantage of them. 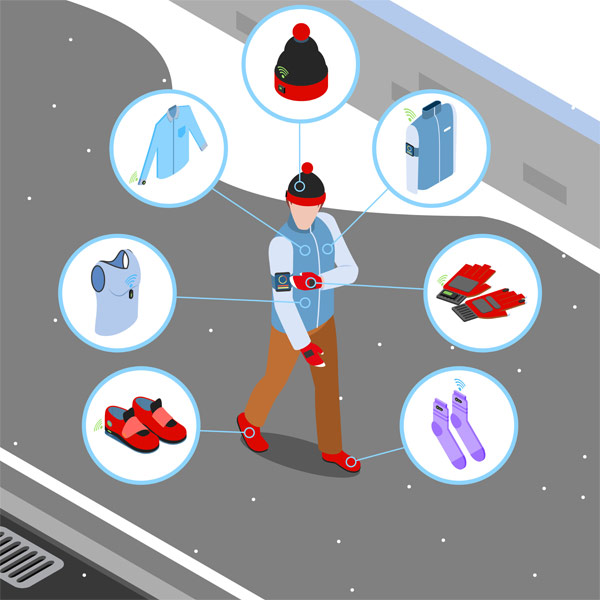 Any garment can become an e-textile or smart textile. Today we already know simple examples as heated clothing. But thanks to sensor technology, much more is possible. 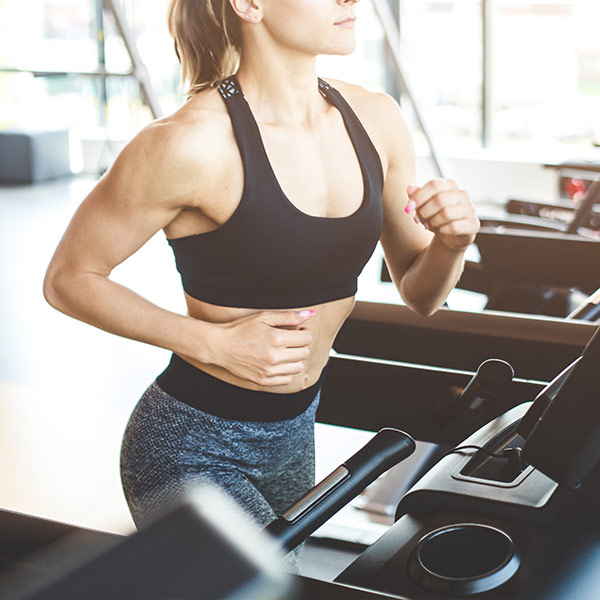 Especially in the field of sports and fitness, smart textiles can deliver enormous added value. They can help users to optimize and better evaluate their sport or training.

What are Smart Textiles anyway?

In fact, the term Smart Textiles could be translated as "intelligent clothing". But why are these fabrics so smart and what distinguishes them from ordinary clothing? Basically, e-textiles are E-textiles are nothing more than the so-called wearables. Wearables are electronic aids that make your everyday life much easier. This includes the smartwatch as well as the in-ear headphones. Just like these wearables, e-textiles are equipped with electronic highlights. Think of The sportswear you put on to go jogging at dusk in winter: Equipped with reflectors, equipped with reflectors, they can certainly be counted among the precursors of smart textiles.

E-textiles, however, can do much more. These textiles contain electronic and flexible conductive tracks, which have been produced using a process known as technical embroidery. Such conductive tracks are are inserted into the clothing during production like ordinary threads, or they can also be subsequently incorporated into the finished product. Electronic components such as circuit boards, on the other hand are automatically fed in and sewn or glued on. Visually, they are not disturbing, because they merge seamlessly with the e-textiles. But what are the sensors good for? They are capable of, heartbeat and breathing rate as well as the ambient temperature.

But that's not all: In part, you will even be able to control various technical devices in your environment with the smart textiles. in your environment. While the smartphone will certainly serve as an intermediary in the beginning, it will soon be possible for textiles future, it will be possible for textiles themselves to charge smartphones and the like. This will be made possible by the frictional energy, known as energy harvesting, that is generated when wearing the coated e-textiles. This principle is already being used in sports shoes, for example. in sports shoes, for example. So-called piezo crystals are built into the soles of the shoes. They generate electricity and the sneaker can be used to charge a device thanks to the stored kinetic energy.

What are the current forecasts?

At the moment, smart textiles are still considered to be wearables, which are of comparatively minor relatively low status. The reason for this is that the range is still quite limited. But that is set to change in the near future. In the industry, e-textiles are expected to show the greatest growth, and as early as and by 2025, it is predicted that around one in ten people will connect their clothing in some way to the with the Internet in some way. For the next three years, manufacturers expect sales in Germany alone to rise to Germany alone, manufacturers expect sales of technical embroidery and smart gadgets to increase to smart gadgets.

At the moment, however, there is still one major problem that most manufacturers are struggling with: How is it possible to design smart clothing so that it is as durable as possible? Although the appearance of e-textiles already leaves hardly anything to be desired, the overall wearing comfort can be improved. The goal for the future is therefore to make smart textiles more robust and more reliable. more reliable. There is still considerable potential for improvement, especially in terms of robustness. The long-term goal is for the technical embroidery and its components to be able to withstand at least 30 washing cycles in the washing machine. in the washing machine without damage.

In addition to the aforementioned problem of robustness and durability, there is another problem at the moment: Demand for wearable electronics is not yet very high. However, since demand determines the demand determines the price, the price is still comparatively high. Also difficult: E-textiles bring you significant added value, but they also collect a lot of your personal data. data. This means that smart clothing controls us in much the same way as smartphones do - a circumstance which is not to everyone's liking.

Electrically conductive textiles and their advantages

Electrically conductive textiles are what the textile industry will benefit from most in the future. will benefit from in the future. Light and heat conductors, sensors and actuators: the possibilities are manifold. For example, it could make sense to have a textile control element that acts like a remote control when touched. when touched. Electrically conductive yarn will be able to interconnect textiles and technology. with each other. Conductive yarns can consist of metal wires or silver-plated basic textile components. consist. These yarns can shield electrical radiation, transmit data or dissipate electrostatic electrostatic charge. To produce such usable textiles, synthetic fibers such as polyamide or polyester are combined with metallic threads. The resulting textiles can be used in a wide variety of ways and are and score points for their flexibility. These textiles can, for example, monitor your bodily functions or even perform a heating function.

Digitalization in the textile industry

Digitization is on everyone's lips at the moment. It's clear that the textile industry is no exception. industry. The smart clothing business is definitely picking up speed, as current statistics show. show. Modern tailors are leading the way: They do not work with conventional yarns, but instead instead use threads that can conduct electricity. This creates electrically conductive textiles, that can react to sounds, for example. However, it is not only small tailors who have trend, however. Major fashion labels have also already recognized the benefits of wearable electronics. The best example is Google and Levis, which have joined forces to develop an intelligent jeans jacket. developed an intelligent jeans jacket. The jacket is connected via Bluetooth to the smartphone, which can now safely remain in the pocket. can stay in your pocket. Instead, the jacket guides its wearer through the morning rush hour traffic. Similar to a smartwatch, the jacket can also be used to answer phone calls or control music. control. Wearable electronics are also nothing new for the sporting goods manufacturers Adidas and Nike. new anymore. For some years now, both brands have been offering intelligent sports shoes that adapt to the running style of the wearer. that adapt to the running style of the wearer. At luxury brand manufacturer Ralph Lauren, on the other hand, you can sportswear that records your most important vital data.

For whom are Smart Textiles suitable?

The innovation of Smart Textiles is aimed primarily at athletes and health-conscious people. But some professional groups also benefit from e-textiles. Let's think, for example, of firefighters, for example: displays can be integrated into their workwear to show the residual air the remaining air in the oxygen cylinder. Smart textiles are also important in the healthcare sector. of importance. If patients wear a special suit with sensors, doctors and nurses are informed about their vital vital functions. At best, this can save lives and should no longer be a utopia in the near future. utopia in the near future. In a retirement or nursing home, for example, it would make sense to have a carpet that informs the nursing staff nursing staff if a resident falls.

Another application could be a textile sensor, which is integrated into the bed sheet in the nursing bed and helps the nursing staff to indicate nursing staff to indicate when incontinent persons need to be transferred to another bed. The same applies They provide doctors and nursing staff with information on the extent to which the wound has already healed. already healed. Athletes also appreciate the advantages of wearable electronics. Intelligent shirts, for example, record heart and muscle functions during the entire training session and provide important and provide important values that are crucial for all professional athletes. So you see: The areas of application of a technical embroidery are diverse and in numerous areas of life useful and meaningful.

Smart clothing will not be the only topic that will move us more frequently in the near future. There will also be innovations in the smart home sector. The fact that you can control your heating or blinds via an app is certainly no longer a novelty. is certainly no longer a novelty. But what about your couch, carpets or curtains? curtains? Smart fabrics with touch functions are what the future will bring here.

Our conclusion about E-Textiles

Now decide for yourself: Are the electrically conductive textiles or other wearable electronics really something for you? really something for you? Do you want to be controlled in your everyday life or do the advantages of smart advantages of smart textiles outweigh the disadvantages? You should bear in mind that you cannot simply take off the electrically conductive textiles like a smartwatch. simply take them off like a smartwatch and they will permanently store data about you. Nevertheless useful and can provide you with valuable information, especially in the medical field. especially in the medical field. In any case, we are excited about what the future holds. We are already developing and produce already today Smart Textiles like heatable clothes, textile humidity sensors, textile sensors for recording vital values, heated carpets and various models of textile infrared infrared heaters to interior heating elements for the automotive industry. Talk to us about your next project.